One of the most well known styles of blues music is the “shuffle”. Commonly referred to as the essence of the blues, the shuffle, has a lopsided triplet feel. A triplet is a group of three eighth notes played within the duration of one quarter note. In order to achieve the shuffle feel simply remove the second eighth note, leaving you the first and third notes of the triplet.

You can try this out by taping your foot at a slow to medium tempo. While doing this, play three notes for every beat. Similarly, you can say the word “Trip-A-Let” from one foot-tap to the next. Now, remove the second note and play the remaining two notes.

Next, we’ll take a look at the key, chords, and scale we’ll use in our blues shuffle. 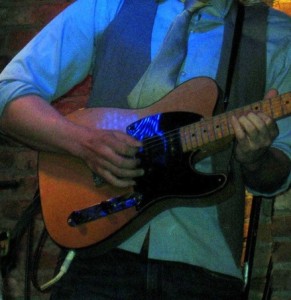 The Key of ‘A Major’

The blues shuffle in this lesson is in the key of A major. We can tell the key because of the three major chords that are present (A, D, and E). As we’ll see in the next section, when playing the blues we don’t use a typical major or minor scale. The blues revolve almost entirely around the “Minor Pentatonic” scale.

Learning the ‘A Minor’ Pentatonic Scale

For our first foray into blues shuffle territory we will begin by learning the A pentatonic scale. This scale is an essential element of all guitar driven music styles. Over time you will develop licks and riffs to use when creating solos.

This “minor” sounding scale is extremely versatile in blues music because it can be used over both A Minor blues chord progressions.

Using your new knowledge of the blues shuffle, press play on the media player below and start jamming to a bluesy backing track. Create bluesy riffs and solos with the A minor pentatonic scale.

Learn how to play the guitar in any genre! Request a free trial lesson to get the best guitar lessons in Northville, Plymouth, Livonia, Novi, South Lyon, and Canton, Michigan.